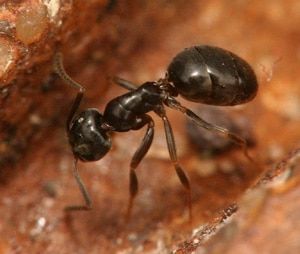 Odorous House Ants get their name from the strong odor they give off when crushed. This native species is found throughout the United States, including South Carolina. It is brown to black in color and the workers emit a pungent, coconut-like smell.

Odorous house ant colonies can be composed of several hundred to 100,000 ants, but usually number around 2,000 to 10,000 ants. Typically, there are many queens in a colony. The first swarmers begin appearing in May to mid-July. When found indoors these ants usually construct their nests near a moisture source such as wall voids especially around hot water pipes and heaters, in bathtubs, beneath commodes with leaking seals, in crevices around sinks, cupboards, etc., but also in wood damaged by termites. These ants prefer sweets but also eat foods with high protein content and grease such as meats and cheese. When found outdoors they are often found in the nest of larger ants, in exposed soil, but mostly under objects including stacks of lumber, firewood, bricks, etc.

They feed on live and dead insects, seek honeydew and plant secretions, and even feed on seeds. They are extremely fond of honeydew and are most likely to enter buildings when their supply is reduced, especially during rainy weather or with leaf fall in the autumn.

Submit Your Info And We Will Contact You ASAP