Fleas are one of the more important groups of insect pests because they not only cause discomfort by biting, but they can transmit several diseases such as plague and urine typhus. In the United States, they are commonly found on both cats and dogs. A typical dog flea is approximately 1/8″ in length with a laterally flattened and wingless body. They are brownish black to black in color but reddish black when full of blood. 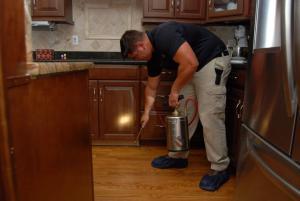 Despite popular belief, it is not necessary to have pets in the building in order to have fleas present. Fleas can jump about 6” vertically, so they can easily hitch a ride on shoes, jeans, etc. Many vacationers who may have been unaware of the few adult fleas present, are often greeted and severely attacked by fleas upon their return. This can occur even if the building has been vacant of animals and people for as long as 6 months or so. This situation can occur because of the potentially long pupal period, adults can live for months without food, and because fleas have not been removed by normal vacuuming. Also, fleas are normally removed from the interior environment by taking up residence on the pet(s). 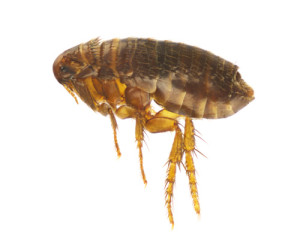 Fleas are typically found where animals sleep or frequent, including along their usual avenue of travel, because this is where eggs and adult fecal blood accumulate. Most larva will be found in similar places but especially in areas with high moisture which is necessary for their survival. Pupae will be found in the same situations as larvae. Such places include both indoor and outdoor stations. Flea larvae die at relative humidities below 45% and above 95%, and hence, are rarely found outdoors in arid climates. Larvae fail to develop at temperatures below 55 degrees and at or above 95 degrees.

Fleas in the house?

So you think you’ve ruled out fleas in the house because you don’t have pets, or you don’t allow your pets in the house. Well, think again folks. It may not be the family pet’s fault this time. It may just be you or even the kids this time. Fleas can use you as a vehicle to get inside your home. In just a week or two, a few of these little hitch hikers can quickly become a flea infestation. Fleas can also come into a house from the crawl space. Many people never think of animals such as mice, chipmunks, squirrels and moles as flea carriers. Fleas can and do feed on these and many more common critters around your home.

You may suspect fleas when you notice your dog or cat is scratching a little more than usual. You will know for sure when they start biting you though.

At this point, flea baths and collars just won’t take care of it.

You need Walker Pest Management’s professionals to treat your  Greenville, Spartanburg or Anderson,  SC home for the existing flea infestation, ensure the problem is under control, and perform the necessary treatments to kill any remaining fleas and those that will soon hatch from eggs already laid.

Even if you kill the fleas in your home,  you may continue to bring fleas in from the outdoors. If so,  the flea infestation is not likely to go away that easily. Many homes will need a flea control treatment done for outdoors as well as indoors. If  you do both services together at same time,  we do give a discount on one of the services.  When we treat your home and/or yard, we take all the necessary steps to provide the most powerful, effective, and most importantly, safe treatment.

Important things that need to be done during a home flea control treatment include:

What does flea extermination cost?